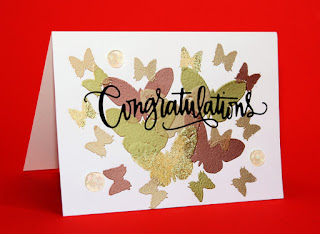 Yesterday, whilst working on the other butterfly beauty card (see below) I was wondering how it would look embossed in different gold tones (Wow! metallic copper, metallic brass, pearl gold sparkle and Papermania gold)
It was 11 p.m. and I didn't want to make the noise with my heat gun, I  have downstairs neighbours.
Today at 11 a.m. I thought it would be OK. ;-)
I used Versamark to stamp all the Simon Says Stamp butterflies and just did one color at the time so not to mix the powders, but also to get the overlay feeling. The metallics 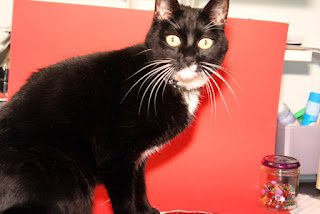 being opaque gives a very different look than the rainbow one and I had to think more carefully about which colors to place where.

Same Congratulations die cut, also Simon Says Stamp with Stick-it on the back.
The enamel dots are also Wow! embossing powder (cha cha cha with Melt-it powder).
I had some in that pearl gold sparkle, but it was all too samey.
On the inside I wanted to emboss "tying the knot" from the Simon Says Stamp stampset 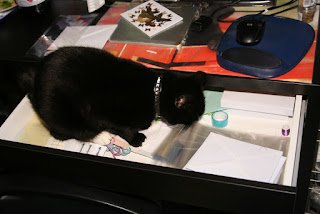 "congratulations" but I decided against it, as this gold colored one could also be an anniversary (50 years? I don't know) or being employed for so long etc...But any congrats occasion would work ofcourse.

My cat Tjeerd was a good little helper, first when I was trying ot photograph the card, then when I opened the drawer where I keep the envelopes and giftwrap and handmade stickers etc...well I say helping....but he's so cute, you just have to smile, because he's purring so loud it's impossible to be mad at him ;-) I moved him to a box now and he's sleeping...lol

For more information on the Simon Says Stamp Monday Challenge, see this. 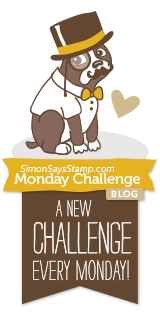 card I made and entered yesterday: 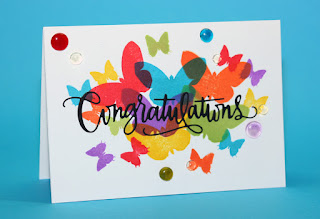 Back to School part 2 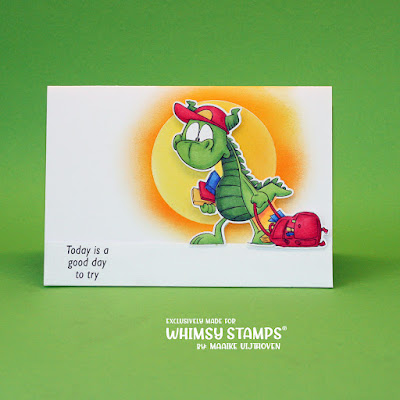