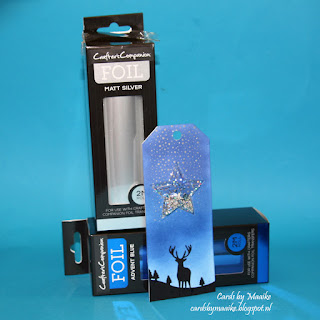 For today's project I chose to make a tag, not a card.
Mainly because I felt the star pouch was a bit small on a whole cardfront and I could have used three or so, but I didn't like that. It's supposed to be the star of Bethlehem, you know the one the wise men followed? there was just one of those, right?

Nuvo Studios came out with these shaker pouches plus dies. I know of three of them, my store carries the stars, the heart and the balloons. I  liked the star the most. Once you have used your 5 pouches in this pack you can buy refills without the die. I think there's 10 pouches in the refills for the same price as this starter set.

To make the tag I cut a piece of cardbase
(300grams/140lbs Canon digital copier paper) to size, to fit the pouch.

I also used the Crafter's companion foil transfers and foil in mat silver.
I only had a narrow bit left of my 6x6 sheet and it's not quite wide enough for this tag but it had to do.

For the tag I inkblended Memento ink (Paris dusk, Danube blue and Summer sky).
I think my tag was still wet from the inkblending as not all the tag took the transfer dots.

The method is to peel off the backing sheet

from the transfers and rub it onto your project. this transfers a kind of glue to your card or tag and then you rub the foil onto it, using the backing sheet. It took everywhere, except where I inkblended a lot.

I die cut the star with the Nuvo die and attached the star negative onto the second tag so it would be in the background.
filled the pouch it all sorts of glitter, micro beads, confetti and sequins.

it takes quite a lot to fill this pouch. And then peeled of the tape backing and tried to be smart and attach the back to the pouch, then flipping it and adding taperunner to the rest...you can see how that worked in the video ;-)...

I did contemplate a sentiment, but decided against it and I like the empty space above the stag I diecut from black card. The stag and trees are from Craftemotions (0173 and 0302)
I attached them with liquid glue also.

All in all I think it's still a nice tag.I might stick in on a card, so the recipient can have it as a card or use it as a tag themselves.

Too cute to spook? 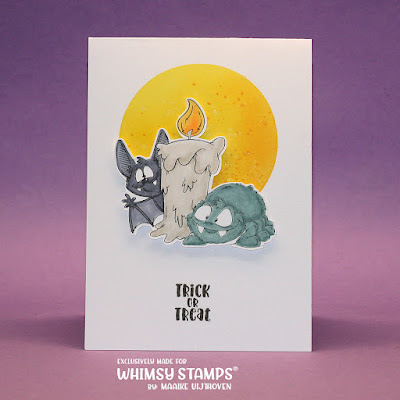