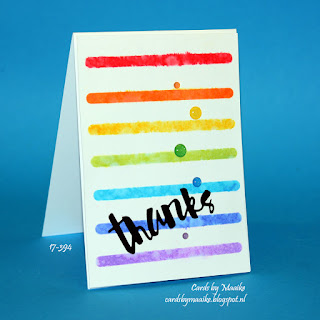 For my card I thought to use the Lawn Fawn slide on over set, but not to make a slider card.

I used this grid paper as I also wanted to show you how I made a grid in Word, printed it, had it copied onto overhead project sheets and then cut to size to fit my Stamper's friend, or the MISTI or any stamping tool you have.
I bought the SSS grid once, but it's small and not metric size friendly. With this all over grid, it really doesn't matter which system you adhere to as you get the full coverage. I think one sheet including copying was 60 euro cents, so, you know...no brainer and whilst I was there I made a few extras for the future or my other stamping tools.

Back to the card. I used the grid to align my die, I started with the outer ones, then the centre and  divided the leftover space in two.
I think it turned out pretty even. I had a smudge though and so instead of a cardbase I turned it into a panel, trying to cut off as little as possible.

Then I took my spray bottle that contains water and a bit of bleach and spritzed and splattered the panel. It distressed the rather graphic stripes. You could also splatter on Distress spray stains in the same colors if you have them or white and silver, but I think that might take away from the graphic feel, instead I used a few enamel dots.
Heat set it the applied foamtape and adhered it to a new cardbase.

Diecut the SSS painted thanks from black card with Stick it on it and adhered it to the card, then matched up some glittery enamel dots (as my splatter). 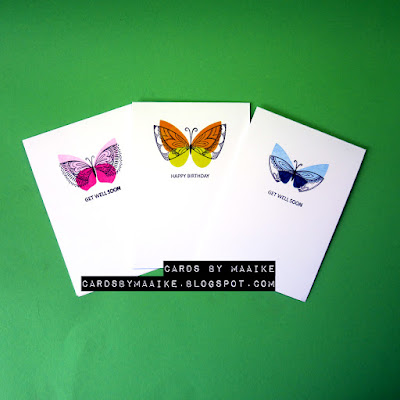