Over the Hill with Video(s) 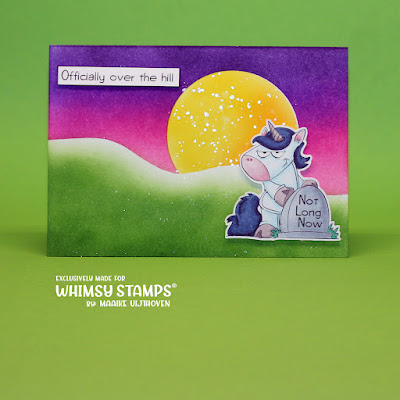 HI, Whimsy Stamps just released a new range of Dustin Pike digis and I love the sarcasm on Caramel the Unicorn, esp this one, with a tombstone. The Tombstone comes in two guise with text and without,s o you can customize it while on the computer prepping the image. I cut the first one without white margin and so I had a chance to change the text with the second one and I went with "Not Long Now"....together with the sentiment banners, Happy Birthday Old Codger and on the Officially over the hill. I know you need to be really close to someone to send a card like this, but I couldn't resist.

Old Codger, means something like grumpy old man, not sure it's a common phrase, so I went with the other sentiment I had prepped and printed on the same card, let the scan n cut do it's work, with! margins this time and then started on the background.

I wanted a order with hills (of course) and maybe a little house, but decided against that.Masked off the moon or sun and inkblended the sky with Distress inks: Villainous Poison, Wilted Violet, Picked Raspberry and Kitsch Flamingo) the Grass is Mowed Lawn and the Moon is Mustard Seed and Carved Pumpkin and then splattered with Lawn Fawn's Liquid Stardust and water, I thought they could be craters on the moon, although it's a bit yellow for a moon, maybe...you decide...the sky is purple because I wanted something surreal and so the yellow moon could be just that...;-)

I colored the image with Decotime and Copic Alcohol markers as I don't have the really p[ale blues in my Decotime set, not sure they exist, but doesn't matter...I have plenty and came up with a few more blending recipes for them, so had to try them. Mounted the sentiment and Unicorn with foam tape and adhered them to the otherwise flat cardbase.

There's 4 other Caramel Sets as well and you can find them here: https://whimsystamps.com/search?q=caramel 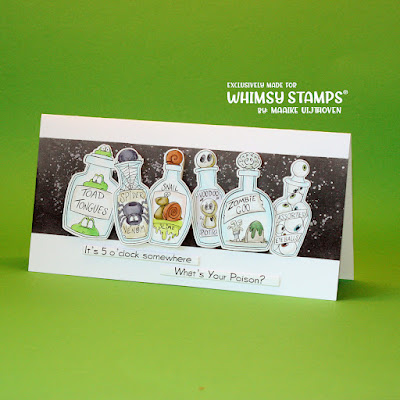