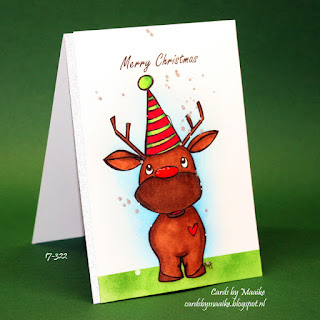 Today I have a two part video.
One is the making and assembly of the card and the other is the middle bit where I color the wonderful reindeer from Pernilla Nilsson.
If you're interested in one or more of her digi stamps. go to her Facebook page and then to albums, there's a free to download one and with the other you just put "buy" under the photo and she will contact you with the payment for Paypal. It's Paypal only I believe, but I think she's wonderful, great digistamps and they're about one dollar each (90Swedish krone).

I made the file with sentiment in a photo editing software. It doesn't come with the text, but while I was there I added it for convenience.
I think the reindeer is more a birthday reindeer with a party hat, maybe a new year's eve one too, but I gave him a Christmassy red and green party hat ;-)

Printed the file with my inkjet printer onto the Crafter's Companion Neenah paper and cut it to a cardzise. I  can fit four card fronts on one sheet, and that's what I did.
My printer is a bit weird with the printing, It's never comes out centered, so I cut it a bit more and filled the gap with a silvery glitter washi tape, much like I do with my watercolor panels.

I never used this Talens masking fluid on anything else but watercolor paper, that's what masking fluid is intended for and well it was a bit nerve wrecking, but it worked. I used my silicon nail art brushes to apply the masking fluid. I  have a video on that too, no more messed up paint brushes ;-)

The masking fluid did react a bit with the inkjet inkt, but nothing too serious. I also left a couple of "leaks" so you can see some Distress inking on Rudolph, but again nothing serious.

For the inkblending behind him I used Distress inks Mermaid Lagoon and Mowed lawn. I wanted just a halo of sky around him, but gave him terra firma to stand on ;-).
I then splattered Dylusions white linen and Distress spray stain Brushed pewter before removing the masking fluid.

I colored the reindeer in a separate video as otherwise it would have been a very long vid. I used mainly my Spectrum Illustrators but also a few Noirs as they were with in reach hehe.
The masking fluid did alter the surface a little and blending was different, but not bad at all.
After coloring I applied Nuvo shimmer pen (clear gloss) on the party hat and on his nose and then Ranger glossy accents on his nose and heart and let it dry.

Then mounted the panel with foamtape and adhered him to the cardbase. 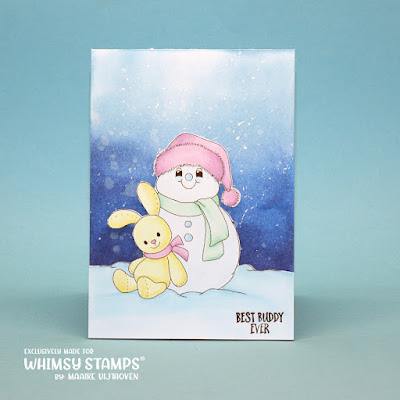